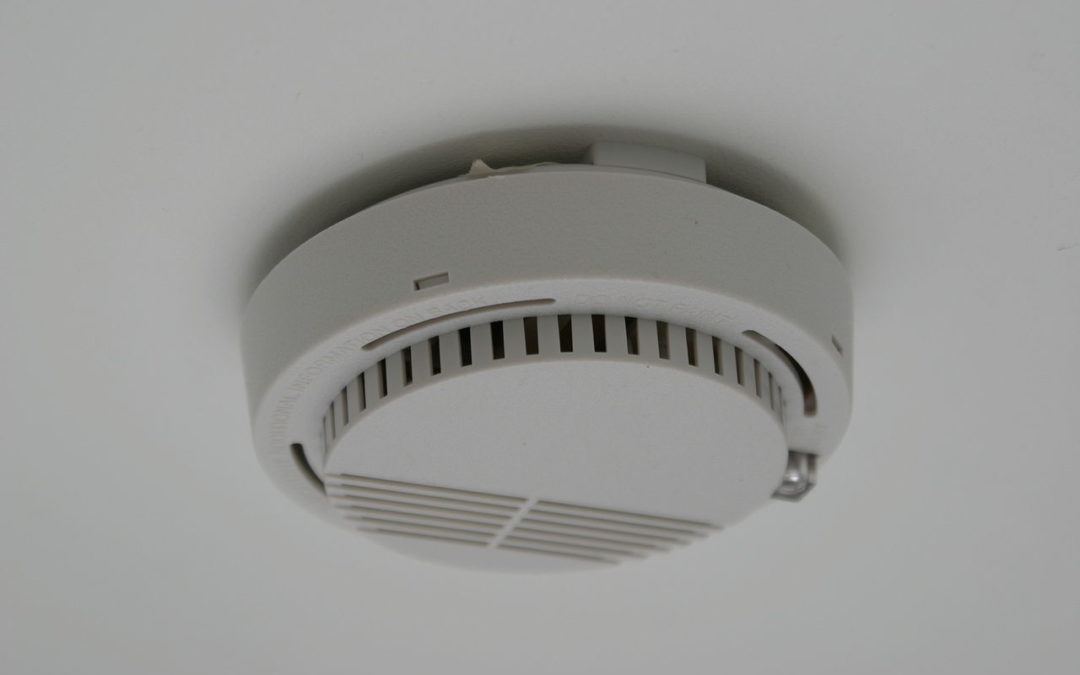 A few months ago, the editors of Evmedreview decided to open an Op-Ed feature and asked Joe Alcock if he would kick this new venture off by writing a series of op-ed articles, once a month. Thankfully, Joe agreed and this is the first article of the new Op-Ed feature. In a week or so this, and all future op-eds, will be moved to a dedicated Op-Ed page which can be easily accessed from the home page. We want to take this opportunity to thank Joe immensely for taking this on. The idea of the op-ed is that it should act as a target article for commentary – to spark a debate and exchange of thoughts and ideas. We want you all to volunteer comments! They can be constructively critical or complementary. Just email to editor@evmedreview.com and we will review them and post them!

Disabling the smoke detector in sepsis

The pharmaceutical company was Eisai, a Japanese firm. The drug was eritoran, an investigational drug to treat sepsis, a condition that is the second leading cause of death among intensive care patients. By inhibiting inflammation in sepsis, eritoran was lauded as a potential blockbuster drug. It had shown great promise in reducing mortality in pre-clinical trials. In 2010 a phase II clinical trial of eritoran showed that it was apparently safe in humans, and the results also suggested lower mortality in those with severe sepsis. Eritoran was supposed to make the company millions, and the investors rich too.

It did not work out that way. In 2013, JAMA published the results of the final phase 3 clinical trial necessary for FDA approval of eritoran. This was the ACCESS trial, a randomized controlled trial involving 1961 patients with sepsis assigned to eritoran versus placebo. Unfortunately for Eisai and its investors, eritoran did not improve survival at 28 days and at 1 year. The drug never made it to market, and it joined an impressive and growing list of failed drugs for sepsis.

Was this just another failed pharmaceutical R&D venture? Or was this result predictable with a little knowledge of evolutionary medicine?

Randolph Nesse coined the term smoke detector principle to explain why some people display an exaggerated response to threats, perceived and real, resulting in anxiety disorders and panic. He writes “False alarms are to be expected” because of uncertainty about the nature of a threat. That alarming noise behind you that triggers an involuntary intake of breath and a racing heart might simply be a harmless falling branch, or a charging grizzly bear. The overreaction to the falling branch evolved because hair-trigger reactions protect us from the far greater cost of being eaten alive.

Beyond panic, the smoke detector principle applies to host defenses such as fever, cough, as well as signaling systems involving microbes. Even more than grizzlies, many microbes are potent killers. If, as Nesse suggests, we harbor threat detectors that are akin to a smoke detector, pathogen detectors might also be prone to overreaction, but reliably protect us when actual fires – infections – happen.

Toll like receptors (humans have 11 kinds) are the body’s smoke detectors that provide a first line of defense against bacteria and viruses. The toll like receptor 4 (TLR4) is activated by lipopolysaccharide (LPS), part of the cell wall of gram negative bacteria, such as Escherichia coli. Given experimentally, LPS causes symptoms identical to septic shock – a brisk fever and dangerous loss of blood pressure. LPS is fatal to humans in doses as low as 1-2 grams. These responses appear to be dangerous overreactions. Might blocking the LPS-TLR4 pathway prevent excess inflammation and death in sepsis? This was the thinking that led to eritroran, an experimental blocker of toll-like receptor TLR4. 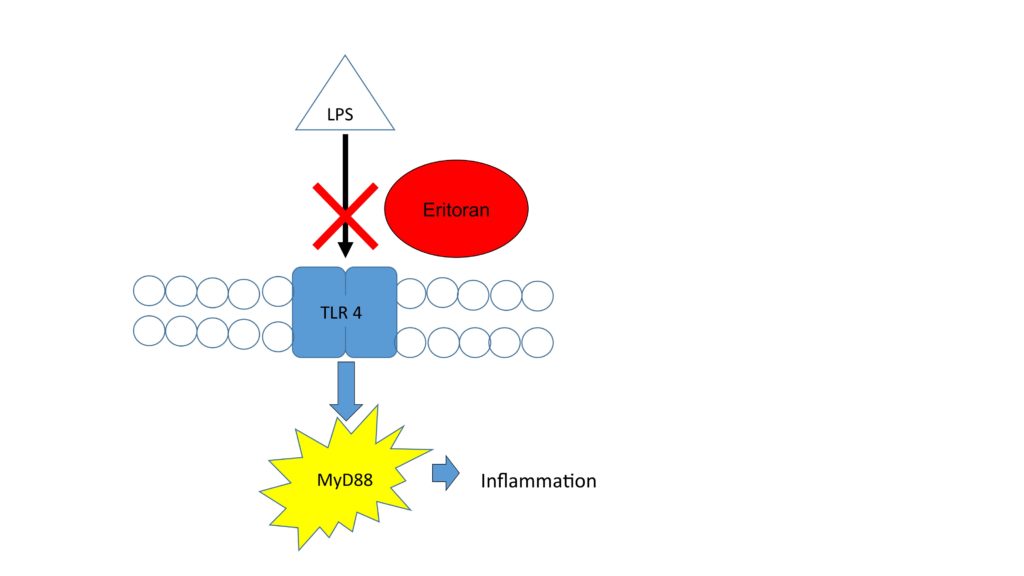 For decades, sepsis research has been motivated by the idea of a dangerous overreaction of the immune system in sepsis. Lewis Thomas wrote about microbes in sepsis: “It is our response to their presence that makes the disease. Our arsenals for fighting off bacteria are so powerful . . . that we are more in danger from them than the invaders.”

Whether the immune system goes rogue in sepsis is critically important because septic shock is a leading cause of mortality in humans. Multiple randomized controlled trials have tested new anti-inflammatory agents with the aim of improving sepsis survival. Only one immune modifying drug, recombinant activated protein C passed through phase 3 clinical trials, gaining FDA approval. Despite this supposed success, later definitive trials involving recombinant activated protein C showed it to be useless and it was unceremoniously yanked from the market in 2011. With respect to the TLR4 pathway, another antagonist of TLR4 similar to eritoran, TAK-242, also failed to improved sepsis outcomes in a randomized controlled trial. More than 10 anti-LPS/TLR4 agents have been tested in sepsis. None have led to successful therapies. 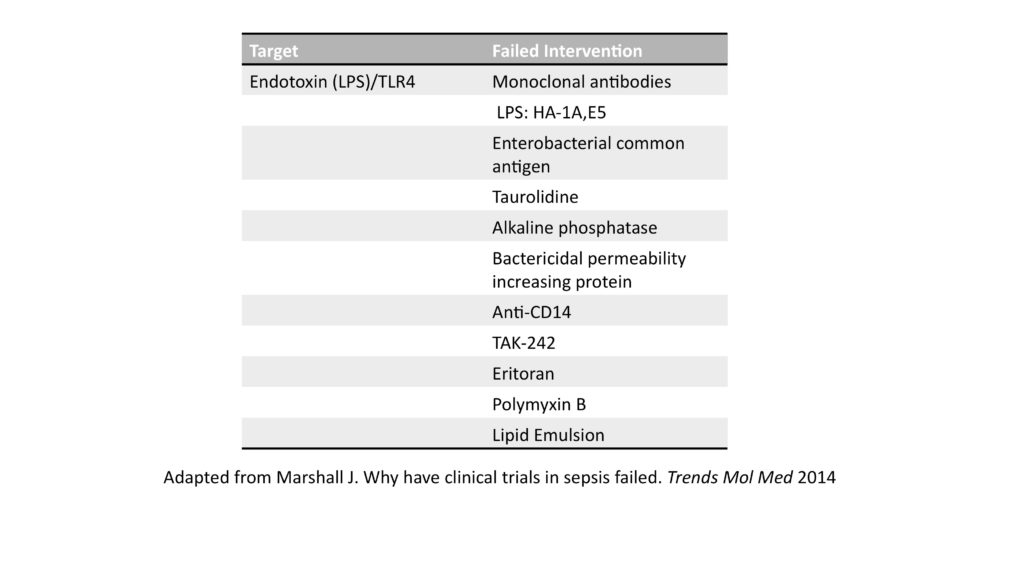 There were additional clues that interfering with toll-like receptors is a bad idea. Previous trials using antibodies directed at the TLR4 ligand LPS failed to improve infectious outcomes. Gene knockout mice lacking TLR4 promptly died of overwhelming sepsis. Human patients with sepsis are more likely to die if they have reduced expression of TLR4.

Maybe it’s not a good idea to disable the smoke detector.

A recent review, entitled Why have clinical trials in sepsis failed? detailed more than 100 failed clinical trials of immune and other therapies in sepsis. Most of these trials target the body’s response, not the invading pathogen. These studies were, in effect, tests of the hypothesis that sepsis is a syndrome of excessive self-harm. The evidence is now in. It’s time to reject that hypothesis.

How has the biomedical research and sepsis drug development community responded to these failures? Humility? A change in course? Often not. Excuses offered for eritoran’s failure included poor patient selection in the ACCESS trial, giving the drug too late, and giving the drug too slowly, in the revealingly titled 2013 article: Targeting Toll-like receptors: promising therapeutic strategies for the management of sepsis-associated pathology and infectious diseases. The authors, Savva and Roger, continue: “Despite the failure of eritoran in the ACCESS trial, new therapeutic potentials might still emerge for this agent.”

In many cases investigators have doubled down, recommending blocking multiple inflammation pathways in sepsis. Savva and Roger proposed targeting TLR9 in addition to TLR4 and wrote: “blocking one single pathway may be insufficient to interfere with the deleterious cascade of events observed in sepsis.” In a recent article in the Journal of Infectious Diseases, Gustavson and colleagues propose that a combined inhibition strategy of TLR4 plus complement might be a promising treatment for human sepsis. These approaches will also fail, if history is any guide. The underlying assumptions of some sepsis researchers apparently have a momentum of its own that is hard to slow down or reverse, especially when it is rewarded with grant dollars.

Another explanation – that pathogen recognition by TLR is adaptive and generally beneficial in sepsis – is unmentioned. In sepsis, inhibiting the pathogen detector prevents some of the costs of the immune response, but it also eliminates the benefit. Making the immune system blind to invading pathogens is no more likely to be helpful than losing one’s sight during a grizzly bear attack. The fact that TLR antagonists, and immune antagonists generally, have never improved survival in patients with sepsis suggests that the benefits of TLR activation outweigh its substantial costs.

Put a different way, as Nesse has written: “The smoke detector principle shows that the overresponsiveness of many defenses is an illusion.”

The smoke detector principle suggests that selection favors responses to life-threats that sometimes appear excessive, but are adaptive and beneficial in the aggregate. This does not mean that every immune response in every individual is optimal. Our genomes have only an evolutionary legacy of ancestors who survived infections (at least until the age of reproduction) to guide them. For our patients, we just don’t know whether, or in what direction, to adjust the immune response to sepsis. But it is time that we stopped acting as if we did, and spent more time trying to understand the adaptive tradeoffs that have shaped our immune systems.