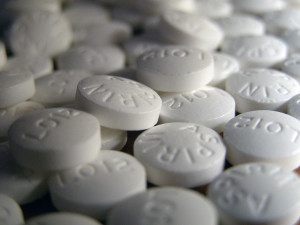 The history of medicine is replete with examples of the disasters that result when clinical practice is guided by theory alone. For instance, in the early 20th century sudden infant death was attributed to suffocation caused by an enlarged thymus.1 Thousands of infants received radiation treatment that created an epidemic of thyroid cancer, with new cases still emerging 45 years after exposure.2

Such examples make most of us in evolutionary medicine extremely wary of basing clinical advice on theory. However, recommending aspirin to prevent strokes and heart attacks seemed like a sure thing. In modern environments, bleeding is less of a risk, and clots in coronary or cerebral arteries are a much more of a risk, than in ancestral environments. Taking a baby aspirin every day should adjust the tradeoffs to help our ancient bodies cope better with modern environments.  Also, studies showing that a baby aspirin a day reduced heart attacks by more than 25% led medical organizations to endorse aspirin for prevention.3

The data supported the evolutionary theory, so I started taking a daily aspirin, and I recommended that my patients over 50 years old do the same. Millions of people took an aspirin every day for years. But it is becoming clear that even solid theory and supporting data are not enough.

The first warnings came from new studies showing that even small doses of aspirin caused more gastrointestinal bleeds than expected. Then, late in 2017, the results of a double-blind long-term study were published. The ARRIVE trial enrolled over 12,000 subjects averaging 55-60 years of age with an average risk for a heart attack; half got aspirin half got placebo. At the end of five years, cardiovascular death, myocardial infarction, unstable angina, stroke, or transient ischemic attack had occurred in 4.29% of the aspirin group, and 4.48% of the placebo group.4 The rate of gastrointestinal bleeding was twice as high for the aspirin group. I stopped taking aspirin and decided to write this article.

This will not be the last word on the issue; compliance was inconsistent, and the results may not generalize to people with higher risk. Patients who have had a cardiac event should not stop their aspirin. But the trial offers yet more evidence that there is no substitute for a controlled trial with random assignment…and that clinical recommendations based on apparently solid evolutionary thinking may not be justified, even when apparently supported by data.