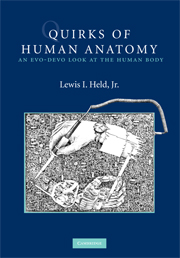 The emergence of Darwinian (evolutionary) medicine had led to a renaissance of many long forgotten biological topics, among which are atavistic traits (traits of our ancestors). These traits that disappeared long ago from our lineage are occasionally reappearing in present human populations, allowing a glance to our remote biological history. This is possible because the genes behind these traits are still preserved in our DNA, although not expressed in most individuals. Atavistic traits together with vestigial structures (structures that lost all or most of their original function in a species through evolution) played a major role in the establishment of Darwinian Theory prior to the emergence of modern genetics. The book Quirks of Human Anatomy revives many of these old ideas and questions (e.g., Where did our tail go?) and poses several new intriguing ones (e.g., Why are we symmetric outside but asymmetric inside?). Yet, the book does not end here; many interesting observations are presented in a form of questions asked by someone who is not acquainted with human anatomy, for example: “Why do optic nerves cross the midline?” The “Why” (evolutionary angle) and “How” (developmental angle) questions lead the book through many anatomical peculiarities, both in forms and structures. These “quirks” are all being placed under the umbrella of “Evolutionary-developmental biology” theory (“evo-devo”).

By presenting and discussing these peculiarities in plain English, the author tries to establish a more easy and enjoyable road for understanding population genetics and evolutionary concepts. This is also why the book is loaded with drawings and lengthy figure legend.  In this respect, the book is indeed a great success as it enables a simple and pleasing introduction to the field of evolutionary biology and Darwinian medicine.

Though enigmas are important to demonstrate a point, they certainly cannot replace a deductive study of evolutionary processes. They are good for raising students’ appetites for a greater and deeper knowledge and in motivating them through curiosity to seek an understanding of the mechanism of evolution.

The book contains 7 chapters (239 pages): The first chapter is an introductory one, with a very interesting and important question at the very beginning: “What role did chance play in our origin?” Despite the numerous new data in the literature on the role of chance in evolution, the answer supplied to this question is disappointing. Chapter 2 deals with the issue of asymmetry. I believe that in the short introduction to this chapter, the author should have introduced the three types of asymmetry known in living organism, namely: directional, fluctuating and antisymmetry. Chapter 3 presents the mysteries of the midline (e.g., Why do symmetric organs fuse at the midline?). Chapter 4 deals with merism and modularity, mainly on various peculiarities of the digits, teeth, vertebrae and arms. Chapter 5 presents in its first part the issue of sexual dimorphism and sex ratio. The fact that these two important topics have been dealt extensively by anthropologists on a large time and space dimensions (from prehistoric times to present, world wide), is not expressed in the text (that could benefit greatly from it). The second part of the chapter deals the well known issue of being the only “naked ape”, and the third part with the number and location of the nipples. Chapter 6 presents silly, stupid and dangerous quirks (e.g., chocking, appendix etc). Chapter 7 is dedicated to the mind and brain, focusing mainly on intelligence.