The Evolution of Evolutionary Medicine 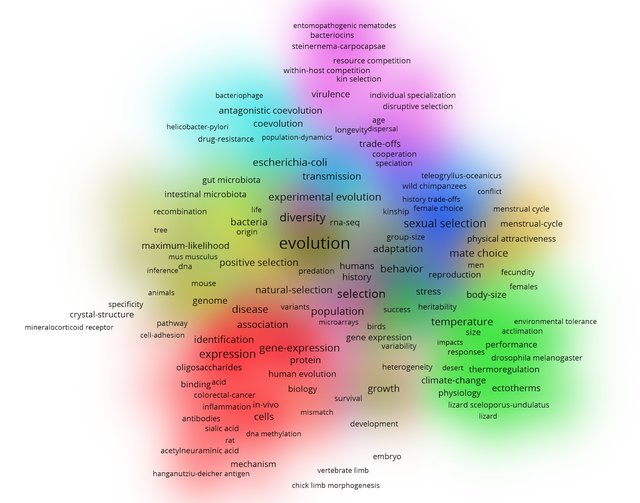 This is an open access preprint of a book chapter by Derek Painter, Julia Damerow and Manfred Laubichler that will be published in The Dynamics of Science: Computational Frontiers in History and Philosophy of Science. It follows the genesis of evolutionary medicine from combination of evolutionary biology and human health & disease to a scientific field flush with global conferences and its own journal.

Abstract: For several decades interdisciplinary research has been pushed by funding agencies, science administrators and generations of well-intentioned scientists. Interdisciplinary research is needed, so the argument, because the problems we face in medicine, environmental sciences, sociology or anthropology — the list can go on — are too complex to be mapped onto one traditional discipline. While the motivation for interdisciplinary research is clear, its actual success is less obvious. For one, we don’t quite know how to measure interdisciplinarity. We also have a difficult time distinguishing different degrees of interdisciplinarity. Do we mean actual collaborations between scholars from different disciplines or are we more interested in a combination of different conceptual and methodological approaches, perhaps even in one person’s work? And how closely are those two layers linked? Does the successful application of different approaches require collaboration between scholars with different backgrounds? How can we tell whether any interdisciplinary approach is “better” and in what ways? Traditionally these questions are addressed in the context of individual case studies, such as with breakthrough discoveries. While those narratives provide detailed insights into some localized scientific cultures, we have no way of answering questions about interdisciplinarity at a larger scale. Yet understanding across individual cases is exactly the kind of information we need if we want to retool the scientific enterprise towards greater degrees of interdisciplinarity. In this study of evolutionary medicine, we asked these questions using an evolutionary biology analogy based on a complete data set (continuously growing) of all publications in evolutionary medicine over the last four decades. By using this analogy, we are able to frame results in familiar terms and better understand the nature of interdisciplinarity and how to measure it. Evolutionary medicine is an interesting case, as it was quite intentionally created as an interdisciplinary field by Randolph M. Nesse and George C. Williams through a conceptual essay \cite{Williams1991Dawn} and a successful book \cite{Nesse1994} — these publications serve, in effect, as the founder effect for the field. Their argument was quite straight forward. Humans are the product of evolution, so are diseases. In order to better understand and treat them, medicine needs to incorporate evolutionary perspectives. Conceptually the argument was easy to follow and quite convincing. Yet the actual scientific practice is another matter, and it is difficult to assess from individual reports whether and how evolution was actually making a difference to clinical practice. Looking at the large corpus of all publications claiming to incorporate evolutionary biology into medicine can give us an answer to the question: “what difference did it make to bring evolution into medicine?” And to ask, in effect, did evolutionary medicine become a new scientific field distinguishable from other disciplines?