The NY Times has an accessible summary of the Crespi/Badcock theory that schizophrenia and autism are opposite poles of the competition between maternal and paternal genomes, based on work by Trivers and Haig.

In a Novel Theory of Mental Disorders, Parents’ Genes Are in Competition 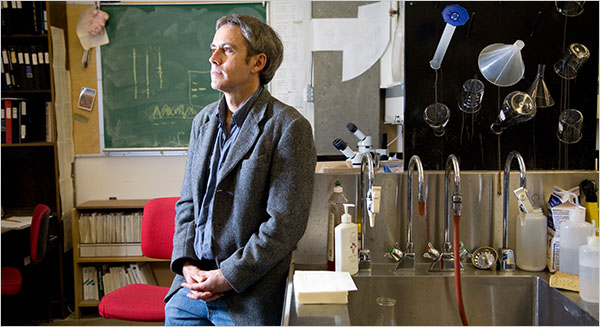 Bernard Crespi of Simon Fraser University and a fellow researcher propose that a tug of war between genes can tip brain development.  [full article]

No genes for schizophrenia? What gives?

Ten years ago, most of us paying attention were exhilarated about the prospects for psychiatric genetics. Heritability is high for many disorders-80% of the variation in vulnerability to bipolar disorder and schizophrenia can be attributed to genetic variations. We thought we would soon find the responsible abnormal genes, and this would quickly reveal the biochemical defects that cause these disorders, and this would quickly lead to ways to cure, or at least dramatically alleviate, these terrible scourges.

Candidate genes were examined by the best researchers using larger and larger samples and sophisticated statistics; a few were identified as prime suspects. Most results could not be replicated, but a few loci were very suspicious based on multiple studies.

Now, in an article by in this month’s American Journal of Psychiatry, Saunders et al. report on 433 SNPs associated with 14 candidate genes that were prime suspects for schizophrenia in about 1900 cases and 2000 controls of European ancestry. The results? Not one of the genes was significantly associated with schizophrenia prevalence. Even a 25% increase would have been detected with high probability.

An editorial by Steven Hamilton tries to put the best possible face on the results by noting that studies of tens of thousands of subjects were required to find genes that contribute to real but small (<25%) increases in risk for Type II diabetes. But that is not the point. Sanders, et al. deserve commendation for stating their conclusion clearly:

Our results suggest that, taken together, common DNA variants in these 14 genes are unlikely to explain a large proportion of the genetic risk for schizophrenia in populations of European ancestry. More robust findings are likely to be discovered using genome-wide association methods and, as our knowledge of the biology of mental illness continues to improve, focused studies of genes based on more precise mechanistic hypotheses. Nevertheless, although larger samples could possibly detect small genetic effects that were missed in this experiment, our findings suggest it is unlikely that true associations exist at the population level for the alleles that have formed the basis for the large candidate gene literature for these 14 postulated schizophrenia candidate genes.