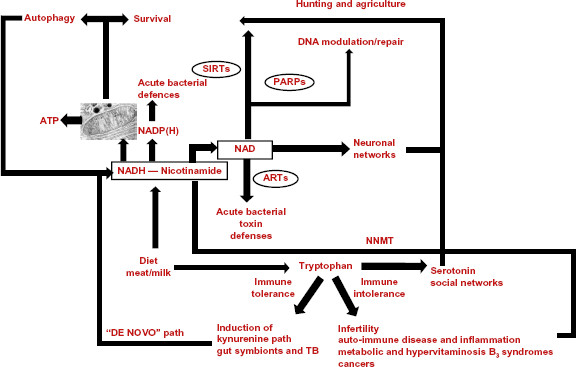 Adrian C. Williams and Robin I.M. Dunbar just published an interesting article titled “Big Brains, Meat, Tuberculosis, and the Nicotinamide Switches: Co-Evolutionary Relationships with Modern Repercussions?” It suggests that TB may have originally been a symbiont that provided essential nicotinamide and that nicotinaminde supplementation could reduce TB rates. See the authors’ commentary below and take a look at their paper.

Commentary by Adrian Williams and Robin Dunbar
Tuberculosis (TB) has traditionally been viewed as a major historical plague that has wreaked havoc on human populations unequally hitting resource limited countries or classes the hardest. We have, however, argued 10.4137/IJTR.S12838 that there are grounds for considering that originally TB was a beneficial symbiont rather than a pathogen. We suggested that increasing supplies of  nicotinamide, the precursor to nicotinamide-adenine dinucleotide (NAD(H)),  from meat was an important element in our evolution of big, high energy and better connected brains and that TB , as a net exporter of nicotinic acid, originally co-evolved over a million years ago as a back-up source. Later as meat variances increased and became longer-term for some TB became a major pathogen, even though as many as 90% infected are in fact asymptomatic. TB immunology is unusual in that it allows proliferation in macrophages and granulomata and is rarely eliminated.  Nicotinamide was the first anti-TB antibiotic described and its analogues, such as Isoniazid, are still in use. Using contemporary and historical data we showed that TB largely disappears as meat and nicotinamide dosage increases – almost immediately followed by an increase in auto-immune diseases compatible with modern versions of the “hygiene hypothesis”. The opposite happens when meat intake declines, in the extreme causing pellagra – that may be a model for human history and progress in reverse.

Since we wrote, TB has been shown to have a toxin that cleaves NAD 10.1038/nsmb.3064; 10.1111/cmi.13115; 10.1074/jbc.RA118.005832 as a NAD and NADP glycohydrolase. This enzyme  depletes macrophages of NAD but releases nicotinamide on a pathway to a type of programmed cell death (necroptosis) that (unlike apoptosis) allows proliferation and dissemination of the organism. Furthermore host NAD depletion, as in pellagra, activates this pathway. Nicotinamide supplementation and NAD levels in at risk populations with poor meat intake could be a test of this evolutionary inspired hypothesis. As many other more classic pathogens use similar NAD- glycohydrolases being nicotinamide-replete could improve host resistance overall. This is of public health importance given over a million deaths per year from TB alone where vaccine programs are largely ineffectual and chemotherapeutic interventions are either unavailable or plagued with six months or more courses and non-compliance or have significant side-effects many immunologically mediated (but notably include pellagra) or fail due to the evolution of  multi-drug resistant strains.