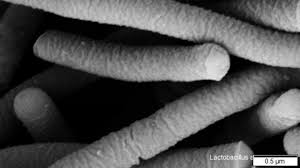 Here’s an interesting little story from the annual American Society for Microbiology meeting that was held in New Orleans this past week. Scientists from Broderick Eribo’s lab at Howard University have isolated a species of Lactobacillus from yoghurt that has widespread ability to impede the growth of a spectrum of important gram-negative bacterial pathogens. Bacterial species are known to impede each other’s growth but, usually, gram-positive bacteria are only effective against other gram-positives, and likewise for gram-negative bugs. This is the first finding of such widespread impedance of a gram-positive bug (Lactobacillus) against many gram-negative species.

In this current work, briefly explained in a conference presentation, 68 species of Lactobacillus were isolated from yoghurt and tested against 3 standard indicator organisms: Staphylococcus aureus, Listeria monocytogenes and Escherichia coli. Although all had some effect, Lactobacillus parafarraginis was selected for further tests which demonstrated that it was capable of limiting the growth of 14 multi-drug resistant pathogens that had been obtained from patients. These comprised 5 isolates of Escherichia coli, 2 isolates of Pseudomonas aeruginosa, and isolates of Acinetobacter baumannii/haemolyticus, Enterobacter aerogenes, Proteus mirabilis and Klebsiella pneumonia. Fast perfusion liquid chromatography and PCR suggested that the inhibitory agent is a bacteriocin. Good evidence for the potential rewards in protection, inside our guts, from pathogens that can be obtained from common probiotics and incorporated into a healthy gut microbiota.