Home > Article Review > Where does antibiotic resistance come from?

Where does antibiotic resistance come from? 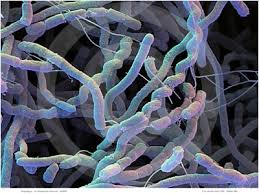 The world has finally woken up to the grave fact that we face the imminent collapse of our first-line medical protection against pathogenic microorganisms – antibiotics. The pharmaceutical industry churns out over 100,000 tons of antibiotics every year, and much of that tonnage is inexpertly over- or mis-prescribed and has led to a plethora of multiply antibiotic-resistant superbugs. But where do these pathogens acquire the genes for antibiotic resistance? There seem to be three answers: overuse of antibiotics either selects for pre-existent resistance mutations lying in bacterial genomes, or fortuitous de novo mutations that occur in the face of the intense selection pressure of antibiotic treatment. And there is a third way. For over 30 years, microbiologists have suspected that pathogenic bacteria obtain their resistance genes from the very organisms that supply our antibiotics in the first place – actinobacteria, otherwise known as actinomycetes, which look like fine filamentous fungal hyphae and inhabit soils.

One single genus of actinobacteria, Streptomyces, has made a gigantic contribution, from the days of Alexander Fleming to the present, to the production of our antibiotic arsenal. Over 80% of our antibiotics have been sourced from them. From streptomycin, in the 1940s, to the cephalosporins, chloramphenicol, neomycin and the tetracyclines and on to erythromycin, vancomycin and gentomycin in more recent years – and many others.